Neymar, Bale, Coutinho: The loneliness of the megabuck soccer star

The new European soccer season is almost upon us but some of the game’s biggest names are facing the danger of being left out in the cold.

Paris Saint-Germain superstar Neymar, Real Madrid’s Gareth Bale and Barcelona’s Philippe Coutinho have spent the past few weeks flirting with moves away from their respective clubs to rejuvenate their careers.

To many, it seems absurd that such a talented trio should be struggling to attract the right suitor given their status.
The problem for a number of big name soccer stars is that there’s seemingly nowhere for them to go. Whereas once upon a time the world’s leading clubs would be falling over themselves to keep hold of star names, now they’re struggling to offload them.
“Neymar’s move to PSG two years ago has permanently disrupted football’s labor market ensuring that he is now a victim of the situation he helped create in the first place,” Simon Chadwick, professor of sport enterprise at the University of Salford, told CNN Sport.
“When the French club’s Qatari investors doubled the existing world transfer record when signing the Brazilian in 2017, this artificially inflated player values, particularly in the way a trickle-down effect took place.
“Ironically, Coutinho was an integral part of this effect. Such transfers have become unsustainable, clubs simply cannot afford such ostentatious spending. Indeed, we have seen many clubs strategically switch focus as a consequence, focusing on the development and promotion of youth rather than the purchase of big names. 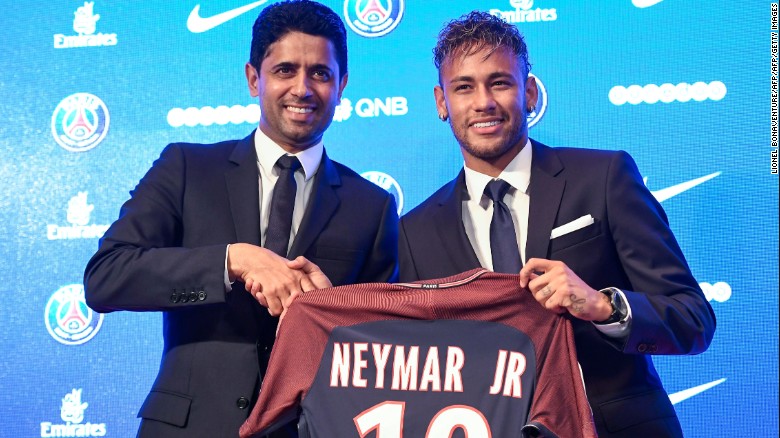 Neymar (R) poses with his jersey next to Paris Saint Germain’s (PSG) Qatari president Nasser Al-Khelaifi during a press conference on August 4, 2017.
“Clearly, this counts against the likes of Neymar and Bale, as clubs simply don’t have the resources to support their acquisition. However, in the case of Neymar, and Coutinho, both 27, and Bale, 30, there are age factors to consider too.
“Should a club buy them now, then they would likely be selling them in their thirties when sell-on values will be less than the sums paid for them.”
Chadwick believes the reluctance to purchase older big name players is a sign of what he terms “economic realism.”
He cites younger stars such as 20-year-old Kylian Mbappe — Neymar’s PSG teammate — as a player who will not only have a higher sell-on value but will also generate a healthy stream of commercial revenue for clubs over the next five to 10 years.
“It may not seem immediately obvious, but Neymar somehow seems to have rapidly become an anachronism symbolizing geopolitically motivated spending that football is simply incapable of sustaining,” Chadwick added. 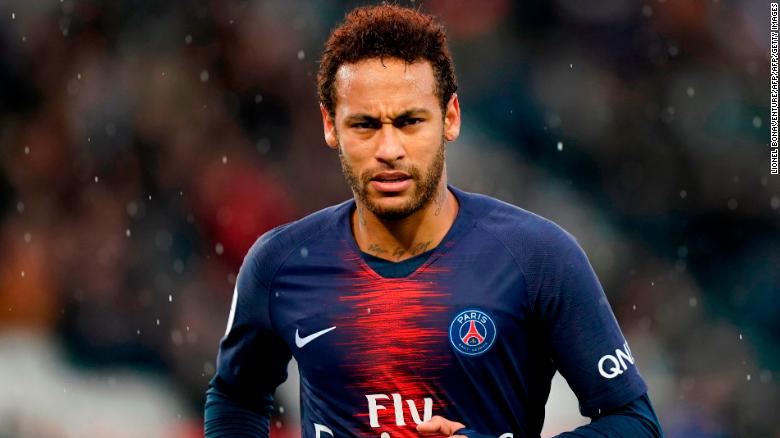 For PSG, the signing of Neymar for a world record fee of €222 million ($246 million) in 2017, was supposed to herald a new era and enable it to challenge for the Champions League title.
Though he scored 27 goals for the club in his first season, and 24 in his second, Neymar was unable to inspire his teammates to European success.
Dominant in its domestic league, PSG suffered a shock defeat by Manchester United in the last 16 of last season’s Champions League, despite winning 2-0 in the first leg at Old Trafford.
In a season affected by injury and suspension, he was also stripped of the Brazilian captaincy after a number of disciplinary issues.
In July, after watching his Brazil teammates win the Copa America while he was injured on the sidelines, Neymar failed to return to PSG on the first day of training, leading to yet more tension between himself and the club.
Neymar in the news both on and off the field 03:18
Speaking last month, PSG’s director of football Leonardo told Le Parisien that the player was free to leave the club.
“There’s a theme across European football at the moment where a lot of big clubs have invested very heavily in star players and whether they reach an end of the cycle or those players want to move on or haven’t been as successful as the clubs had expected them to be, they’ve proved very difficult to move,” European football writer James Horncastle told CNN.
“Neymar at PSG, Paul Pogba at Manchester United, in Italy you look at what has happened with Gonzalo Higuain who Juventus spent $90 million on a couple of years ago, and have tried to move him to Milan last year. Milan said it wasn’t working out for them, then he went to Chelsea and now he’s back at Juventus.
“I think the inflation of the transfer market we’ve seen over the past few years is now not catching up with clubs but giving them problems that are really difficult to resolve from a financial point of view to get a return on the investment to alleviate some of the pressure that players with these kind of wages bring.” 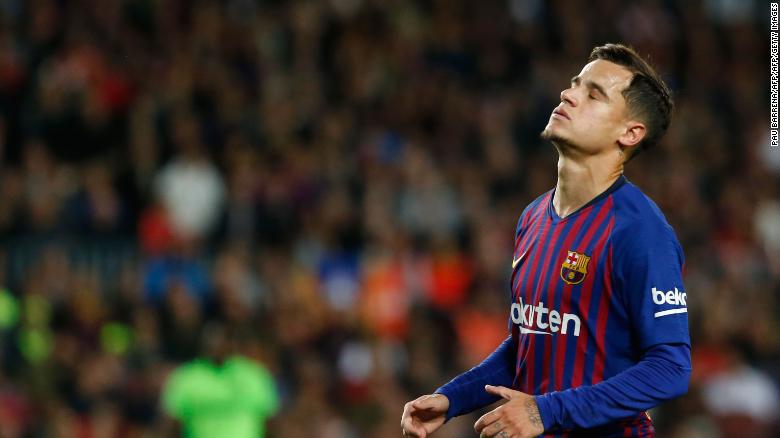 Brazilian midfielder Philippe Coutinho has struggled to make an impact at Barcelona.
Neymar is not the only Brazilian superstar stuck in limbo.
Coutinho, who joined Barcelona for a reported $170 million from Liverpool in 2018, has struggled to make an impact in Spain after starring in the English Premier League.
He became the third most expensive player in history when he made the move to Barcelona but his future now looks to be elsewhere.
A return to England would reportedly suit the player, but his former Liverpool boss Jurgen Klopp has already ruled out such a move.
“In general, Phil Coutinho helps each team in the world, still — 100%,” Klopp told ESPN last month. “It’s not about that. I like Phil, I think he’s a fantastic footballer and all that stuff, but it would be a big, big, big, big, big, big, big, big-money signing and it’s not our year for that.”
Gareth Bale has endured a difficult past year at Real Madrid.
While Coutinho awaits resolution on his future, Bale is similarly stuck.
The Welshman, who has three years remaining on his current deal, had appeared set to complete a move to China last week after reportedly agreeing $1.2 million-a-week deal with Jiangsu Suning.
But that move was called off by Real President Florentino Perez, who has often come to Bale’s aid during his difficult time in the Spanish capital.
Bale, 30, has suffered a series of injuries over the past four years, limiting his appearances for Real. He has made just 79 La Liga starts in the past four seasons.
Yet his contribution, 14 major trophies, 102 goals and 65 assists in 231 matches, remains hugely impressive.
He made 42 appearances last season as Real endured a dire campaign, finishing 19 points behind arch rival and La Liga champion Barcelona and surrendering its Champions League crown at the last-16 stage. 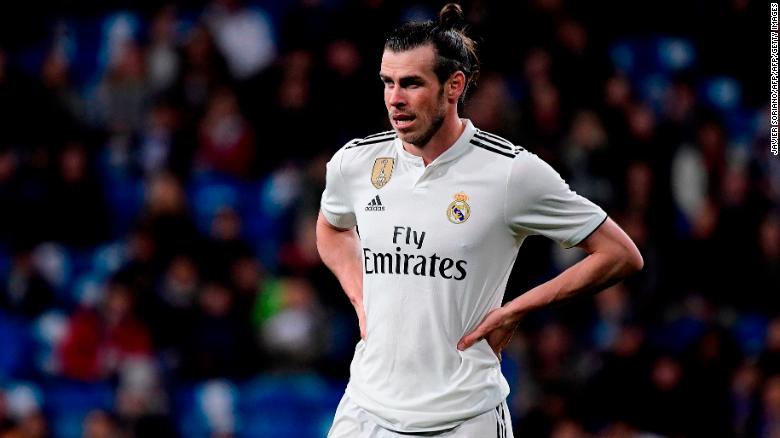 “Real Madrid have made a rod for their own backs,” Horncastle told CNN.
“He’s got multiple years left on his contract, he earns very good money there and I think it’s complicated for a club to find an alternative destination for him.
“Someone who can provide a fee, which would allow them to go back into the transfer market and buy again. Someone who could satisfy the player in terms of what he earns.
“It’s a Rubik’s Cube for them to solve. I think from Bale’s point of view, for someone who has achieved everything he has in the game, having won multiple Champions League titles … what is his ambition?
“He has nothing left to prove. Does he feel the need to move elsewhere? I think beyond the relationship between him and the manager, there isn’t any real reason to go.”
Share61Tweet38ShareSendShare