A Russian passenger jet flew into a flock of birds then crash-landed in a cornfield just outside a Moscow airport Thursday, according to Russian state news agency TASS.

The Ural Airlines Airbus A321 was carrying 226 passengers and a crew of seven from Moscow’s Zhukovsky airport to Simferopol — a city on the Crimean Peninsula — when it ran into trouble.
Shortly after takeoff, the plane “struck a flock of gulls,” according to an official from the Federal Air Transport Agency, TASS reported.
“Some of the birds were sucked into its engines,” he added.

Emergency services assist at the scene on Thursday.
The official told TASS that the emergency landing took place in a field less than a kilometer (0.62 miles) away from the airport’s runway.
Twenty-three people, including five children, have been hospitalized, TASS reported.
In May, at least 41 people on board a Russian Aeroflot SU1492 jet were killed after the aircraft crash-landed at a Moscow airport on Sunday, bursting into flames on impact.
And in June, two passengers were killed on a Angara Airlines flight in Siberia after it overshot the runway and burst into flames. 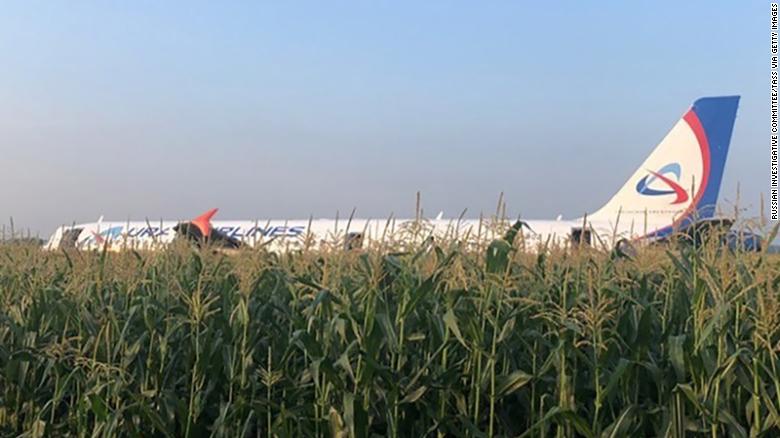